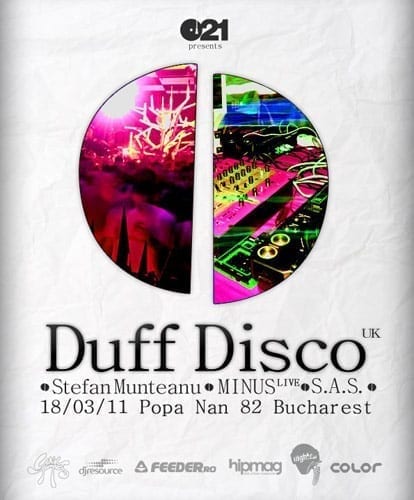 Ladies and Gents, it gives us great pleasure to announce that “The Duff” is coming to Bucharest to give us an outstanding performance !!!
Jeremy Duffy aka Duff Disco, one of Britain’s most acclaimed re-editors and Djs is going to be rocking Popa Nan 82 on the 18th of March.
“Championed by the likes of legendary edit king Greg Wilson to new kids on the scotch block, The Revenge and The 6th Borough Project, he has managed that rare feat, to slide in to a market that seemed flooded and make a real impact.”
“They say he changes when the sun goes down” ☺
“Following a mega-hyped remix of Dan Black’s ‘Symphonies’ on Polydor, Duff Disco has gone on to release edits of The Thin White Duke, The Red Hot Chilli Peppers, Mark Morrison, Steve Miller Band and Stretch that have all graced the top sales charts on Juno.”