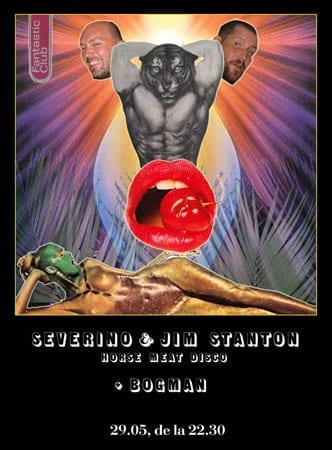 Since its humble beginnings over 6 years ago Horse Meat Disco has become an institution on both sides of the sexual divide due in large part to its dedication and appreciation to Disco music in all its forms. The brainchild of James Hillard and Jim Stanton via the inspiration of New York nightlife legend Adam Goldstone (RIP) the idea was to create an alternative party that harped back to the halcyon days of parties like The Loft and The Gallery in New York whilst at the same time adapting it for a London crowd and always looking to the future. This formula proved successful from the start and led the club to take up its residency every Sunday in the most fantastic South London boozer; Eagle London.

Jim and James both DJs in their own right enlisted the help of 2 of London’s hardest working DJs to help create the sound that would take HMD from its beginnings in a china town basement to the recognition it now holds. Those DJs being Severino hailing from Mantova in Italy and Filthy Luka (aka Luke Howard) resident of Queer Nation and life long disco fanatic. These 4 DJs with their knowledge of music and what makes a dance floor move proved a force to be reckoned with and the parties soon became the talk of the town attracting a discerning mix of old time disco heads, club kids, bears, naturists and something new in gay clubs; a space where disco fans of a heterosexual persuasion could live out their fantasy of going to a gay disco club without feeling totally out of place. The club’s ethos has always been to provide a queer space for everyone after all the best parties have always been the ones where the crowd comes from all walks of life.

Over the last few years Horse Meat Disco has been involved with exciting projects such as The NYC Downlow which took The Glastonbury Festival and Lovebox Weekender by storm in 2007/8. The recreation of a bombed out New York street scene with a gay club tucked down one of its alleys filled with trannies, hookers and leather boys coupled with the best music heard and performances by the London’s cream of alternative gay performers consolidated HMD’s reputation for creating one of the most unique and underground parties around.