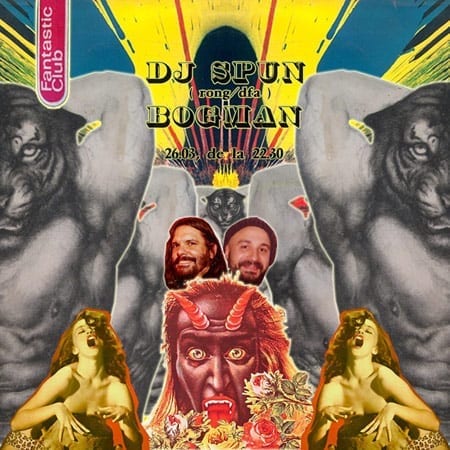 If busy means happy, then DJ Spun should be delirious. A key player in various U.S. music scenes since the early 80’s, he got his start playing in San Francisco bands and has shared the stage with such punk luminaries as the Dead Kennedy’s, Black Flag and Social Distortion.
In 1987, he got his first DJ gig, an opening slot for Kurtis Blow in San Jose. From there he went on to his now legendary club nights. He held residencies at such seminal West Coast parties as A Rave Called Sharon, Funky Techno Tribe and The Gathering. Manning the decks in countless guest spots Spun has racked up the frequent flyer miles playing at many world-renowned parties and clubs, among them San Francisco’s Wicked, Organic, Spundae, and End Up. LA’s Unlock the House, New York’s Centro Fly, APT. Passerby and 205, Frankfurt’s the Omen, Rio, Cookies and White Trash Fast Food in Berlin, BED in Bangkok, Liquid Room and Unit in Tokyo, and Lick and Organic in Sydney. Frequently playing with people like Harvey, the Idjut Boys, Rub n Tug.
In 1994 Spun went back in the studio and start writing and producing his own music, since then he has produced 35 records and 5 cd’s for numerous labels including NOID, Editions Disco, Big Bear, and his own Rong Music. Most recently he’s remixed James Chance and the Contortions, Tussle, Mudd and Tim Love Lee and collaborated with Stranger, Olivier Spencer, Eric Duncan, Daniel Wang and Stephen Hall of Arthur Russell and Loose Joints fame.
Spun, along with partner Ben Cook, founded the trailblazing Rong Music in 2003 as a means of releasing their own style-bending, genre-blending music as well as the output of likeminded friends and peers. They have enjoyed heavy airplay and chart action from some of the best loved and most forward thinking underground DJ’s everywhere.With a spate of releases from such far afield artists as jazz great Chico Hamilton, Mudd, Chicken Lips, Woolfy, and Freeblood
Currently residing in New York City, Spun is also the curator and organizer of P.S.1/MoMA’s prestigious
Warm Up Music Series. Acknowledged as NYC’s best Summertime Party, “Warm Up” averages 4000 attendees each Saturday. He’s also resident at APT. and 205 club with Eric Duncan of Rub n Tug.
Busy guy, that DJ Spun….