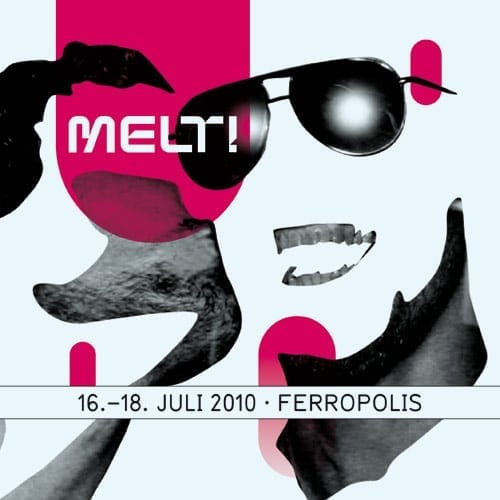 ‘The Dirty Dozen’ is history and we proudly present the first confirmations for the 13th edition of Melt! Festival at the wonderful and unique Ferropolis festival site, set against a breathtaking backdrop of five huge hulking coal mining diggers that tower into the sky.

We almost shed a tear on getting this confirmation: The grandmasters of TripHop, Massive Attack, will get the huge diggers at the “City of Iron” to vibrate under the influence of their bass-heavy Bristol sound. As another high-calibre headliner, we are very proud to announce The XX. Rest assured that the aesthetic overall concept of the British trio fits perfectly into the Melt! scenery. Booka Shade will present their new album ‘More!’ at Melt! and they promise that ‘There will be a lot of physical action and sweat on the stage’.
Not only new bands will join us in Ferropolis this year. We are also glad to announce some new and strong partners. Bench is our new headline-sponsor and Warsteiner is our new beer-partner.

What else? Look forward with us to another British act: The Wombats have booked their tickets to Ferropolis and are presenting their new album. Foals catch up on last years’ cancelled gig, OstGut Ton presents the sound of Berghain & Panoramabar, Audiolith Pferdemarkt will be functioning as the official Melt! opening on Thursday, Meltselektor Stage curated by Modeselektor, Blood Red Shoes return to Ferropolis, Video-icon Chris Cunningham in Germany for the first time and exclusively, Techno-legends Carl Craig feat. Mike Banks (Underground Resistance) meet Ricardo Villalobos, Don’t miss the Crookers.

Massive Attack
They are big, they are back, they are Massive Attack. With a little teardrop in our eyes we are proud to present Massive Attack to headline this year’s Melt!. Their latest album “Heligoland” is simply mindblowing. Robert Del Naja and a returned “Daddy G” Marshall released a record that shows such class and such impressive skills – it reminds you of the blessed “Blue Lines” times. And there’s so much shoving and humming and rumbling and purring and singing that it makes your heart jump. Is this still Trip Hop? That’s a question Del Naja declares irrelevant. The other day he said in an interview that he never really understood the word, it was better to file the music under “B as in Bristol”. And it is really the daily culture clash in a city that has become rich through slave trade, which made up the primordial soup for the Massive Attack sound. With their sound, they fit into the Melt! scenery perfectly. But we can negate the rumour that the diggers would have to be reinforced to be able to take on their basses – nothing can bring those iron colossi down!

The XX
The words newcomer and band are not enough to describe South London’s threesome The XX – even though they are right. But The XX are rathera piece of art than a band. What proves this statement is that video artist Saam Farahmand showed us that the nameless debut with the simple X on black background is also working as a sculpture. His art exhibition “The XX – A Sculpture Of The Album” accompanied them on their world tour. But Oliver Sim (bass and vocals), Romy Madly Croft (guitar and vocals) and their producer and beat wizard Jamie Smith would not have led last year’s polls if they wouldn’t have released such a fantastic album and wouldn’t have carried it around the world in so many shows. So it is not surprising that their atmospheric shows are close to a mass in which the visitors jump from devout awe to ecstatic jubilance. Moreover, The XX are probably going to realize one thing: If there is one location that fits into the aesthetic concept of the band, then it is definitely Ferropolis in Melt! mode: A cool city of iron, which is heated by hot euphoria for three days in a row.

Booka Shade
When the Melt! weekend finally approaches, the new Booka Shade album will be in stores and turntables already. It is called “More!” and you can exactly what they mean with his self-concious title statement in every of its eleven tracks: From beginning to end, “More!” delivers an audible “More!”. One the one hand, there is more of their very own technoid House sound, which has become the trademark of their label “Get Physical”, on the other hand, the duo sets sail into even more new sound realms and structures, which go way beyond the dancefloor. The body does not want to leave the dancefloor, but the thoughts are fee, are invited by almost orchestral keyboard passages to lose themselves in the Booka Shade universe. It is not surprising, if there is a sample going through the song all of a sudden, in which a resonating women’s voice states: “To be a spaceman would be amazing. Free and falling through space forever and ever.” Nonetheless. At the end of the day, the two of them are a live act: “There is a lot of physical action and sweat on the stage”, Arno Kammermeier comments. “We could establish a name as a very energetic live act.” And everyone will agree to this after seeing them live.

OstGut Ton presents the sound of Berghain & Panoramabar
At the Melt! weekend, the almost cultishly adored Berghain crew is taking a field trip and leaves behind the beloved co-generation power station walls in exchange for the iron digger scenery we call our own. Of course the harsh Berghain sound that made its protagonists and their venue famous all over the world, fits Ferropolis just fine. And who will be holding the banner of the OstGut Ton Meltdown stage? Marcel Dettmann, Ben Klock, Norman Nodge, Tama Sumo, DJ Pete, ND Baumecker, Boris, Nick Höppner, Prosumer, Steffi, Marcel Fengler and Shed live are going to be at Melt! Ostgut Ton – the label of Berghain – picked the name of the stage. Ostgut Ton does not only represent a wide range of artists, but also believes in German artists, even if they are totally unknown. In October, the label is celebrating its fifth anniversary – a great opportunity to celebrate early at Ostgut Ton Meltdown.

Melt! Selektor Stage curated by Modeselektor
Gernot Bronsert and Sebastian Szary aka Modeselektor do not have to prove to anyone that they can master all kinds of Dancehall, HipHop, Techno and, above all, Dubstep. They are an authority in the Electro world, and are known as the ones who accomplished to establish the very British genre Dubstep in Germany – and to send it back out into the world with their very own odour. They are doing this so convincing that even the British Dubstep pioneers send their props. Modeselektor’s reputation surpassed all genre scenes by far by now. For example, Radiohead offered them a support slot once, or German chartbreakers Fettes Brot recorded a hit single with them. Now Bronsert and Szary use their standing to function as stage curators for the Mad Max stage right at the beach on Friday. And once again, the show that they know good taste: Four Tet are going to play their smart Electro, Jackmaster is showing his remixes and Mala is going to perform his “Digital Mystiks”. And by inviting the Dubstep icons Martyn and Kode 9, they bow to their influences – and with Jamie XX, they are exactly at the pulse of the time: The producer and beat wizard from The XX is introducing his own Dubstep project there. And of course, Modeselektor themselves will be on stage as well – and they will do so in a Berlin battle with the crazy artist collective Bonaparte.

Official Melt! Opener- The Audiolith Pferdemarkt on Thursday
The camping site ravages of the Audiolith crew are tradiontially opening Melt! festival and they have a short, but wild history: For the past couple of years, they have always been the perfect – even though inofficial – opening of the Melt! weekend. It’s about time we get these guys and their mixing-prone hands onboard officially and give them a highly official site opening party of a virgin festival site: Saalschutz, Egotronic, Bratze, Frittenbude and, of course, the DJs of the Hamburg cult label are going to take over the Melt! Klub on 15th of July. This is also a noise control measurement for the neigboring towns, this is why we kindly ask you to not organize any private parties with sound systems in the camping area. The capacity for the pre-party is limited to 3,000 people, so we are charging 5,- Euro (including fees) for entrance. Part of that fee will be donated to local social projects (more info to come soon). Tickets are only available as etickets via www.meltfestival.de/tickets. A part of the revenues we donate to the “The Concert in memory of Alberto Adriano” on June 12th in Dessau. Melt! is the official supporter of this concert and also helps in booking. The proceeds from this concert go to one third to the family of Adriano, to an other third to the “Opferfond rechtsradikaler Gewalt” and the last third to the “AG Materialien zur Aufklärung und Kritk” (Antifa Sachsen-Anhalt). We ask you for understanding us wanting to have a good relationship with our neighbors and are looking forward to a great party – Audiolith-stlye.