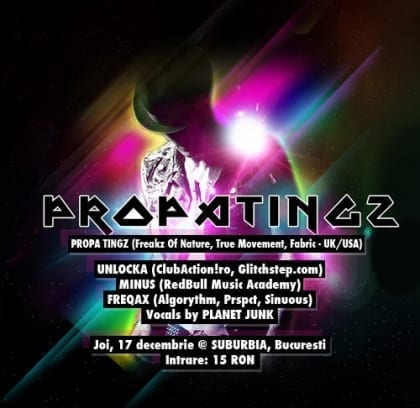 Propa Tingz is responsible for some of the biggest dance floor bangers to emerge from the West Coast scene in recent years. Under his former guise as BreakbeatBudda, he helped forge the now lauded California Glitch Hop scene alongside artists like the Glitch Mob and Laser Sword. As Propa Tingz he is widely acknowledged as a pioneer of Glitchstep; a bad-bwoy soundclash of Bay Area hyphy, Dirty South Crunk, UK Bass, and the cutting edge of Glitch.
His unmistakable British delivery and brash, in your face, bottom-heavy beats have created quite the buzz for this producer/DJ. Although often seduced by the rush of violence and crime where he was raised in the badlands of Wolverhampton, he managed to find a focus within the graffiti and hip hop scenes. From that point on his love affair with underground music would take him far and wide.

Mr. Tingz was kind enough to give away a couple exclusives: A dirty take on Felix Da Housecat’s “Kick Drum,” and a nasty Glitch Dubstep tune that uses a Missy accapella nicely.