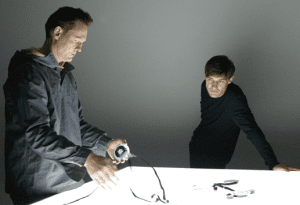 1. You have begun your artistic activity before the fall of the Wall; what was the climate like for artists?

I grew up during the 80’s. At that time everybody knew already that the system was dying. There was a kind of underground movement that felt quite free. I was a part of that and when I look back it was a very inspiring time. We watched a lot of Slavic films, like Gabor Body, and all the russians. Music-wise it was very easy to get a good selection of West European avant-garde via the radio. If you were ok with the situation that you couldn’t consume and couldn’t travel – you had a lot of time to be creative. Everybody was doing something or everything, a lot of autodidacts tried to do art: one day music, next day film eetc.

2. What did the fall of the Berlin wall mean for your artistic creation?

There were two main changes.

The first came with the day of the Fall of the wall. It changed my focus; the feeling of time was radically different from one day to the next. I mean during the “Eastern times” I had a feeling of time like in aTarkowski movie. With Western culture, it changed to much more speed or dynamic. It was very interesting to be in Berlin at all these illegal house parties – in a way it stopped for a time my creativity but I was loading my batteries a lot.

The second change came later – during the “Eastern times” I had a feeling that what I was doing was not right – to make something that nobody really needs. And my way of thinking was also very locally connected. It took me a lot of time to recognize there was no Big Brother anymore, and in a way I am much more free to do what I want to do. Today I don’t talk anymore with a virtual god of morality. And also my world is much bigger now – not only in territory, but also in variety and influences.

3. How much of an influence for your early work was Kraftwerk, from the perspective of the “audio-visual” experience?

Kraftwerk for sure it was an influence, it was very plastic, in same time intelligent and deep – state of the art for many years.

But there was a lot more and maybe more important influences like stage shows of Neu, Laurie Anderson, or Heiner Mueller (theater).

4. How did you develop this blend between sound and light/image? Tell us a bit about your beginning in this field.

I started with film, because i found a 16mm camera before the fall of the Wall. It was a bit expansive to work with the material, and i started to scratch, or draw directly on the film-material.

5. Your performance is made up of two main elements – sound and image; is there a precedence of one over the other? Would you say music is more important than image?

Yes it is about music, the visuals are supporting the music, I always try to give not too much complexity to the pictures.

6. What, then, is the relationship between the two elements?

Audio analysis is mostly the technological link, the movements are based on the frequencies or dynamics in music.

I look for an abstract translation of the music without any story-telling or narratives.

7. You said in an interview your music is meant to make people dance, though very few of the classical elements of dance music are present in it. What is dance music, for you?

I’m a bit surprised – there are many faces of music, it’s not only about dance; but yes I am mainly interested in the connection between body and music; but it’s not only dancing, thought that is an important part. For me the music is a very interesting possibility to communicate deeper than with words.

8. Why did you choose this particular name for “Death of a Typographer”? Is there a connection to your graphic designer side?

Yes and no. Ok, one thing I had to give up a little bit of the raster-noton graphic design to get more time to do music.

9. To the uninitiated, the human element seems to be missing from your performance – you perform in front of a laptop and the only light comes from the projections; how is your live performance different from a “couch” session?

This is a very old-school question. My instrument is the computer, right, and I try to do something on stage that is suitable for this instrument. I know it is not easy for the audience to recognize what I do. I stopped having any time structure prepared beforehand, so all the flow of music is performed, also some sounds – how they come in, the changes in frequencies, and the breaks.

At the same time I don’t want to start doing something fake just to make it a bit more entertaining.

It is the frequency that has most of the power to stimulate our bodies. in a field of more and more club music it makes totally sense that the bass is present. In the past I worked much more with a pure bass, now i try to combine it more with a midrange and very high frequencies.

11. What shall we expect to see in Bucharest?

Hard to say, I think I’m in between. It is a very rhythmical set, but same time not like a dj. I try to mix elements from electro and rock music, but in a more abstract way, i mean for example i have no sampling nor real guitar sounds.

12. What do you expect from Bucharest and from your performance here?

I heard bucharest is very interesting at the moment – a bit like berlin during early nineties, i hope my music fits the zeitgeist of Bucharest.

Two things: we had some experiences with record labels and so on. We always felt that we had to do too many compromises because there were too many interests involved. Second was the technological evolution fitted perfectly to that time. Internet started, we could afford cd burners, we could do our own graphic design on the computer.

14. Please explain your focus on packaging design considering we live in an age of digital distribution.

Its like books: ok, you can read a pdf, but it isn’t the same if you have a real book in your bookshelf. The way how you use it is very different. We want to give our artists, our customers and ourselves this luxury to hold something in their hands, something to touch. I use a lot the digital distribution channels, but if I really like something, I try to get it physical. I think physical things also have a longer life. Maybe it is my age. but when your complete life is on one hard drive, it is very easy to lose all your family photos, your music library and you love letters.

15. What kind of artists/music does your label promote?

We work in a field of digital music. We are looking for artists who use the technology in a specific way. But most important thing is that a raster-noton published artist has his/her own esthetic profile. And we love music which takes a risk, a risk to try something new, never heard before.

Sure, raster-noton is an artistic platform, we really work for specific releases and we want to surprise ourselves.

raster-noton is our life, it isn’t a delivery company for a specific sound. We all are kids of these time and answers from 96 can’t be same 10 years later.

17. You’ve pushed experimental/unusual sounds from the beginning; why is it important to feed these kinds of sounds to people?

We grew up with the evolution of computer technology, in the first years we really searched for an esthetic that was typical for a computer.

And second we are surrounded by noise and noise is very time specific, we want to use this noise for an artistic content.

18. How does your label reach new audiences?

Often we do raster-noton nights, sometimes we collaborate with guests like fennesz, richie hawtin or ryuichi sakamoto.