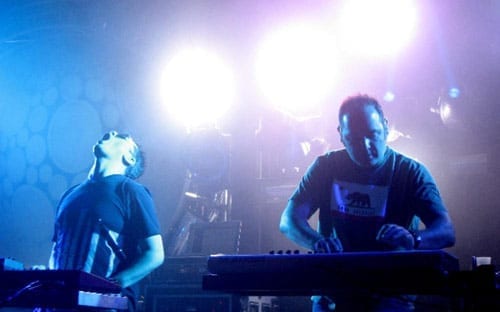 Feeder.ro: What’s it like growing up in Las Vegas, Nevada? For a European, that looks like such an odd, out-of-this-world place!
Ken Jordan: It is different growing up in Las Vegas – but when you’re really young you don’t understand the differences – you don’t know what gambling is, and our parents did not work in the casinos so it was more of a normal childhood, normal upbringing. It is true, you have slot machines and video-poker machines in every convenience store, and things like that [laughs]

Feeder.ro: That’s why I was wondering, can you have a normal childhood in Nevada?
Ken Jordan: With most of the families, the parents do work in some part of the hotel or gaming industry, so a lot of them have to work strange shifts and so that might cause a really strange childhood for children, but ours was pretty normal.

Feeder.ro: So then you moved to LA, met Scott, and decided to make music using a synth and a guitar?
Ken Jordan: We actually met in Las Vegas and then moved to LA after we started working on music, and it was always synths and samplers and drum machines and Scott did have some guitar experience from when he was younger.

Feeder.ro: Does that mean that he played in a punk band, or something?
Ken Jordan: I think he said he was in some kind of band but they never did anything [laughs]

Feeder.ro: Ok, ok.. So – you’ve been in the music business for about 15 years, yet in all this time you’ve only released 4 albums. Why?
Ken Jordan: We work a long time on each one [laughs]. But we actually have released more than that – we’ve done two mix cd’s, a soundtrack album and another album for Nike and Apple called “Drive”.. but yeah – this is our fourth proper studio album. You know – we like to take our time with our albums.

Feeder.ro: What’s the idea behind the title of your latest album, Divided by Night?
Ken Jordan: It’s just a metaphor for how we work and how we live, our personal lives and our professional lives. We do a lot of DJing, and a lot of touring and it’s all at night and it’s much different from our normal life when we’re at home.

Feeder.ro: Which version of your set do you prefer, for a concert? I understand there is a DJ set and then there’s a live show.
Ken Jordan: They’re both completely different. We really like doing the concerts, we’re putting all our own music and it’s more like a concert, but when we DJ it’s more of a night-club atmosphere, more of a party atmosphere, and we get to play longer set times, so sometimes the DJing is more fun.

Feeder.ro: So – what will happen in Bucharest? Will we have the live show or will we have the DJ set?
Ken Jordan: It’s going to be DJ set in Bucharest, only because we have a live show the day after in Warsaw and we couldn’t get all of our gear from one place to the other in time.

Feeder.ro: But that means more party for us!
Ken Jordan: Yeah! More music for Romania! [laughs]

Feeder.ro: What kind of music, then, shall we expect from your set?
Ken Jordan: A lot of our music, different remixes we’ve done, different remix of a lot of new sounds, we’ve got an amazing new remix of a song called “Come back clean” that Kaskade did for us – it’s just amazing, we have another remix that’s done by South Central of a song from the new album called “Drown in the Now”, so a lot of those, we also play a lot of hard electro-sounding beats as well, and a lot of updated breaks-style things.

Feeder.ro: What’s it like to publish your album on your own record label?
Ken Jordan: Well – it’s the only way I would do it now because.. Our first label we had, they don’t exist anymore, the last the label that put out our third album – they don’t exist anymore, so.. [laughs] you can’t trust any labels to be around much longer. And we’ve been doing this a long time and we know the business well enough so we can do it ourselves.

Feeder.ro: So, your labels are starting to disappear so I take it they weren’t large record labels, like Warner and Universal..?
Ken Jordan: Well, they were.. one was called Outpost, was connected to Geffen then it got absorbed by one label, and got absorbed by another label, and then they didn’t exist anymore, the label itself. And then the last one was V2, which was Richard Branson, and all of that.. and he’s gone too, so yeah – it doesn’t matter how big it is.

Feeder.ro: You are one of the most successful dance acts to ever hit the US, both in terms of longevity and of record sales. Have you ever found yourselves in a situation where you’ve decided to not release a certain track because it wasn’t.. let’s say mainstream enough?
Ken Jordan: That happens everytime we’re working on an album; we work on many more tracks then get on an album, and then we keep the best ones, but we’re not really too concerned about what different audiences would think; we just make the records for ourselves and if we think they’re good enough, they go on. Our new album is very diverse – a lot of tracks have vocals, there are slower tracks and faster tracks.. We’re not too concerned about what any particular group of people might think – we just want to make a good album.