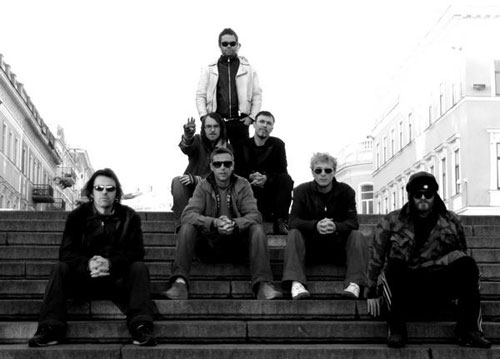 FEEDER.ro: Hello, what music do you listen to these days? Please name a few artists that you particularly seem to enjoy lately.
Howard Gray (Apollo 440): There have been some really good bands to the fore in dance music. When we started it was all faceless techno and we were constantly having to tell people we were not DJs but musicians. Pendulum, Klaxons, Hot Chip and Justice made great albums. We recently remixed Haduken and CSS who are my favourites.

F: You’re probably expecting this question, so here it goes. Please share a couple of thoughts regarding the 2008-awaited album – “The Future’s What It Used To Be”. I understand you’ll be playing fresh tracks from this album at Bestfest…
HG: We had a fantastic tour of major Ukrainian cities,playing to thousands in packed main squares. We came back home totally buzzing and went into our studio and made a new album. First featured as vocalist on the title track of “Electro Glide in Blue”, Ewan MacFarlane made his live debut for us last year, and sings the new songs. Expect to hear a few at B’estfest..
We have been thinking about post-modernism itself as a symptom of high tech prophecies, the continual repetition of the same sci-fi utopia. Are the ghosts of sentient machines and post-industrial economies vunerable to exorcism? And making the most pumping bass,rockin riffs,banging beats and sweetest bleeps!

F: Among your five albums so far (including the to-be-released one), which one is your favorite, if you would have to choose one?
HG: I am loving our new songs right now, but looking back I feel that “Electro Glide in Blue” was special because it came out at a time when our Rock/Dance collision was in tune with the times. Previously rockers and ravers did not mix, but all over Europe we got festivals jumping. It was also an exciting time to be in the east, it seemed everybody was getting to party at last! Maybe that is why we get such a good response in Ukraine, Poland, Czech Rep, Hungary, Russia, Albania and I hope Romania. It was kind of a “summer of love” before everyone had to get real again. That kinda makes us the Beach Boys so maybe I have lost the plot?

F: How would you describe your music? Who were your early influencers, back in the 1990s?
HG: Our early infuences were techno labels like Warp and R&S. Every month records came out with brand new never heard before sounds. Really radical records were storming the dancefloors and topping the charts out of nowhere. We wanted to make dance music with the power of the heavy rock we knew as kids. Joey Beltram loves Black Sabbath type of thing.

F: I like your albums’ cover art. Who’s responsible for that?
HG: We always take time to get quality cover art, the singles in particular make a fine collection, many of them portrait photos. The last album cover painting was a brilliant punning rework of Duchamps “Nude Descending a Staircase” by a top Californian dude whose work Noko collects.
It is a shame artists in future will not place such empasis on this aspect in the age of the download.

F: Why do all artists feel the need to have a MySpace page? Isn’t MySpace a mess, with all those spam-comments?
HG: Feel free to spam
Check out new song “Odesa Dub Step” on Apollo440 MySpace.